LADYBUG ON A LEAF BOOKMARK 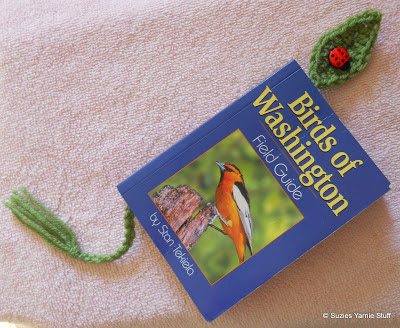 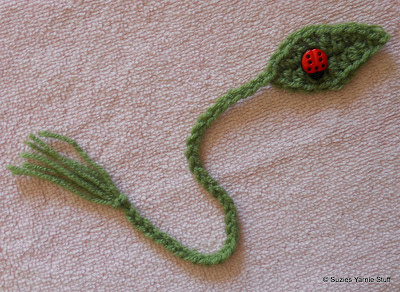 I'm just getting started on a project to make dozens of bookmarks to give to the local school's reading specialist.

This is the first of what I hope will be several posts of bookmark ideas that I've had in my head for some time.

INSTRUCTIONS:
LEAF:
Ch 4, remove hook from loop just pulled up.  Using the small hook pull loop of yarn through shank of button.  Replace I hook in loop and snug up against the button.  Ch 4.

TASSEL:
Using yarn from the outside of the skein cut 3 strands of yarn about 6 inches long.  Fold in half and draw loop through the last chain of stem with a crochet hook. Draw the loose ends of the strands through the loop and pull them down tightly to form a knot. Trim ends of tassel evenly.

Comments:
Suzie, this is a great idea. I'll be part of a fund raiser in April. The fund raiser is going to be geared towards children of all ages. The money goes towards shcolorships for Art students,usually 2. I will mention that this is from your pattern if it's ok.

That will be okay. Good luck on raising money for the scholarships.

Love it!! That's a neat bookmarker!!


There is a Google Group where we talk about patterns and post photos of our projects if you are interested in joining "SYS Yarnie Stuff" group, email me at suzettaw98226@yahoo.com with a request and I will send you a link to join us.