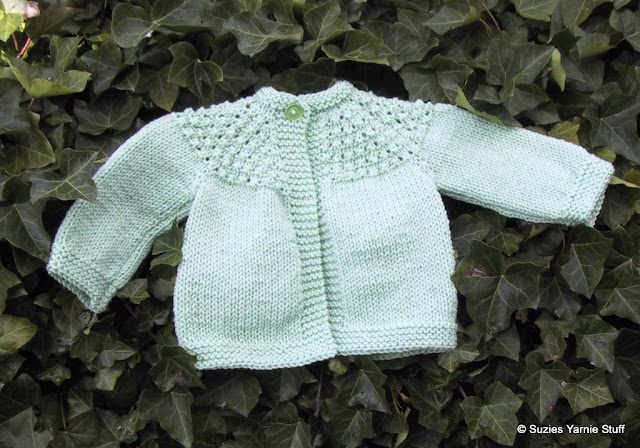 This sweater is yet another adaptation of the 5 Hour Baby Sweater originally posted on Knit List. There are several adaptations on Bev’s Country Cottage. Being larger it takes longer to knit, hence the 7 Hour Toddler Girl's Sweater.

Thank you Virginia for testing this pattern.

SIZE: 12-18 months
Garment measures 25 inches around, would fit about 22 inch

NOTES:
1. Read instructions all the way through before beginning.
2. I used a 29 inch circular needle.
3. I used waste yarn rather than stitch holders. 4. There isn’t enough yarn in a multicolor Red Heart Super Saver, so either choose a solid color or buy two of the multicolor.
5.  See correction in red at end of row 16.

SPECIAL STITCHES:
M1: Make a backward loop and place on right hand needle.
Increase (inc) 1 st in next st: Knit into front and back of that stitch.

DIRECTIONS:
Starting at the neck edge, cast on 37 stitches, using “knitted on cast-on”.

Row 9: K5 *K1, insert needle under next horizontal loop of row below (between sts) and knit this st. Repeat from * across, ending K6 (51 sts)

SLEEVES:
Knit 25 sts and place on a holder or waste yarn. CO 2 sts and knit across the next 30 sts (first sleeve), CO 2 sts, Working with another set of needles and on these 34 sts, work in stockinette stitch for 30 rows.

Bind off leaving last stitch on needle. With right sides together slip stitch sleeve closed being careful to close up all the holes at the underarm. Place last stitch on left hand needle. Knit 2 tog and knit across to next marker. Place sweater back stitches that you just knit on a stitch holder or piece of waste yarn.

Weave in ends and sew on button.

Comments:
Hi There
I made the Baby girl vest and loved it but I have a four year old granddaughter who would like one and I don't know how to make it bigger! about a 6 please help
thanks so much April (Marysville MI)

I would just make it longer, the body is probably wide enough.

This is my first time knitting a seamless baby sweater, and only my second baby sweater ever--I'm almost done and wanted to say THANKS for this pattern! It was a breeze to get through. The one thing is that I think some of the end of row stitch counts are off in the yoke section of the pattern. I may have just miscounted though...

Julia I had the same problem with stitch count also. This being my first sweater, I thought I messed up; so I was glad to see your post. I added stiches in the marker part so it matched the stitch count in the directions. I did it in the back section which ended up leaving three holes that were not suppose to be there. I look forward to trying it again. Great pattern!

The stich count is wrong in the yoke..where is says 38...should be 45 and then the same thing happens on another row.......But if you do the following rows as it says then the stich counts will be right.....those are the only two mistakes I found! I love the pattern and I enjoyed doing it very much! Beautiful sweather! Thanks for the pattern!

Hi Suzette. I was knitting the 7-hour toddler girl's sweater and think I noticed an error in the number of stitches on Row 25. The pattern states (93 sts), but after tearing out half the yolk to start over and following the pattern, I think that it should read (107 sts). Please let me know if I'm correct; if so, you would need to post a correction. If not, then I'm ready for the funny farm! Enjoy your blog very much.

Sandi is correct the count at the end of row 25 was wrong, see the edit.

Please HELP!!! On Row 30 when you begin the M1 I ran out of stitches. Please explain the M1 more clearly. wrap the yarn then stitch in front and back of which stitch? The instructions say "that stitch" Why are there not enough stitches? I had the 121 from the previous row. THank you

There are no knit in the front and back instructions and no "that stitch" on row 30. Just follow the instructions as written, don't try to read between the lines.

Suzie you are the best! I am a brand new knitter and this was my first sweater. The directions were clear and amazing. I actually was able to do it!

I have also made your sleep sacks and they too are great,.

Thank you for offering these patterns and for making a beginner feel like she can do anything!

Thanks for telling me, you made me smile and I'll feel good all day.

I've just completed the first sleeve and cast off up to the last stitch. I don't know how to sew it up in order to get the last stitch from the cuff back on the left needle to knit the back. Should I just break it off? Love the pattern so far!

Use a crochet hook to slip stitch the sleeve seam.

If you started with 37 stitches you should end up with 51. Don't know where you got off track.

Almost done with the long sleeve sweater. I have made several top down sweaters, but none worked quite this way. I don't think this is for the notice knitter, but it's a fun challenge for someone with just a little bit of experience. The row count in the yoke is definitely off but easily adjusted, I just had to add a stitch or two to get back on track. Thanks for the free pattern!!

That would be following the pattern as written, not reading anything into it!

That's why I always suggest reading a pattern through before starting. You would be surprised how many don't do that.

Can someone plese tell me what the CO means when working on the sleeves?

I just finished making one and would like to make another for my 5y. old. Is it possible that I just can start by increasing the pattern by 10 stiches? I would probably have to figure out how many stiches to separate for the front, sleeves and back parts which is ok.

I don't know the answer to your question. All you can do is give it a try and see how it goes. If I was going to try I think I would use 12 so you could have 6 in back and 3 on each front, but haven't tried it so don't really know.

Hi,could you please heeeelp? as I'm a beginner and never knitted with circular needles before could I still knit this jumper using straight needles? if so which sizes of needles? Also I don't understand the M1 stitch. Also as I'm a new knitter but can do the basic squares,scarves etc and the basic stitches such as knit, purl, stocking, moss and rib and increase, decrease, cast on/off but I am having real trouble following patterns to make my first toddler cardigan or jumper. Do you know of any even simpler to follow patterns than this one? I apologise if I sound a little stupid here....I'm just rather anxious.

Congratulations on taking up knitting. It is a skill that you will enjoy your entire life.

This pattern does require knitting with a circular needle, because of the large number of stitches as you get along. Circulars are easier to use than straights.

Here's a link the M1 = https://www.youtube.com/watch?v=f7oABJLKZtw

If you insist on straight needles use a pattern that you seam the pieces together. Yuck, I hate seaming.


There is a Google Group where we talk about patterns and post photos of our projects if you are interested in joining "SYS Yarnie Stuff" group, email me at suzettaw98226@yahoo.com with a request and I will send you a link to join us.